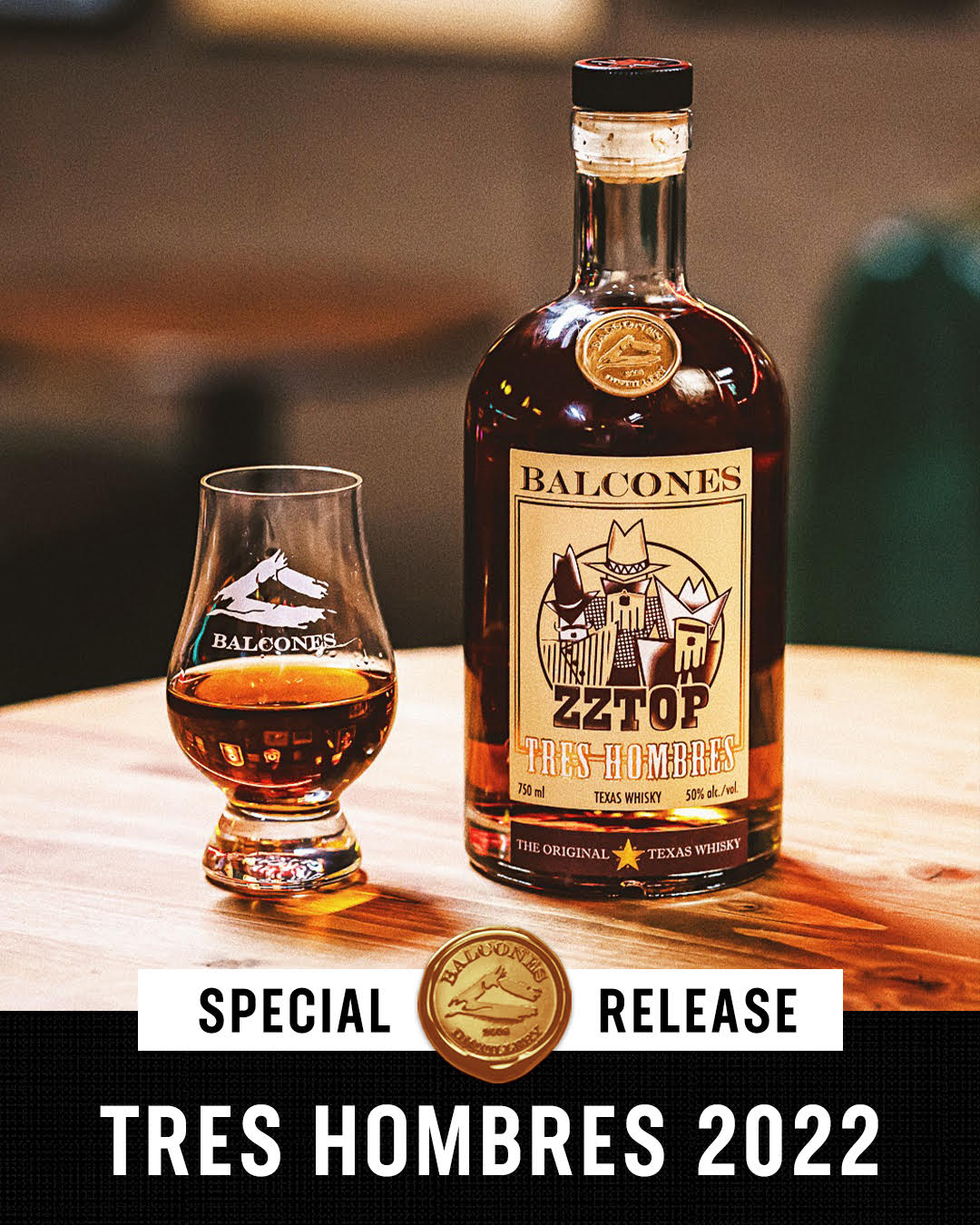 Balcones Distilling and Rock& Roll Hall of Famers ZZ Top announced today the return of their iconicc ollaborative whisky, Tres Hombres. The one-of-a-kind expression was originallyreleased November of last year, with presale selling out within minutes.

Tres Hombres pays homage to ZZ Top’s first top 10chart album released in 1973 and is made using a grain-to-glass approach with three distinct grains: roasted blue corn, barley and rye, one for each band member. The expression celebrates strong Texas ties and a mutual love for whisky between the Houston-founded rock and roll band and Waco-based distillery.

Described as “That Little Ol’ Whisky from Texas”, Tres Hombres boasts a powerful flavor profile as aromas of honey crisp apples and buttered pastry greet the tongue while notes of brown sugar and red grapes fill the palate. The finish is vivacious and bubbly, full of bits of fresh ginger and sage.

ZZ Top has been synonymous with all that is the Lone Star State for more than five decades. Named the “Official Heroes'' of the State of Texas and renowned for their signature blues-rock sound, ZZ Top has created 15 studio albums and sold an estimated 50 million albums worldwide.

“The initial launch of Tres Hombres and collaboration between two Texas originals was an overwhelming success,” said Carl Stubner, Manager of ZZ Top. “We’re looking forward to rolling it out a second time, raising a glass with fans of the band and fans of good whisky across the country.”

In addition, ZZ Top will be launching RAW, a new album set to be released on July 22, 2022.  RAW was recorded and filmed for the Grammy-nominated Netflix documentary, "That Little Ol’ Band From Texas."

RAW will also be supported byZZ Top’s forthcoming RAW WHISKY TOUR. The tour, starting on May 27 in SanDiego, CA, will see the band on stage in 100 dates across North America in2022.

Jared Himstedt, head distiller at Balcones Distilling, added, “ZZ Top and Balcones share a passion for creating things that are authentic, memorable and tell a story. Tres Hombres does just that, and we’re excited to bring the whisky back to been joyed by Texans and beyond.”

“X” MARKS THE TOP! NEW ZZ TOP TRACK IS “HEARD IT ON THE X,” A ROCKIN’ HOMAGE TO THE ERA OF BORDER BLASTER RADIO

SEETHER PREMIERES OFFICIAL VIDEO FOR "WHAT WOULD YOU DO?"