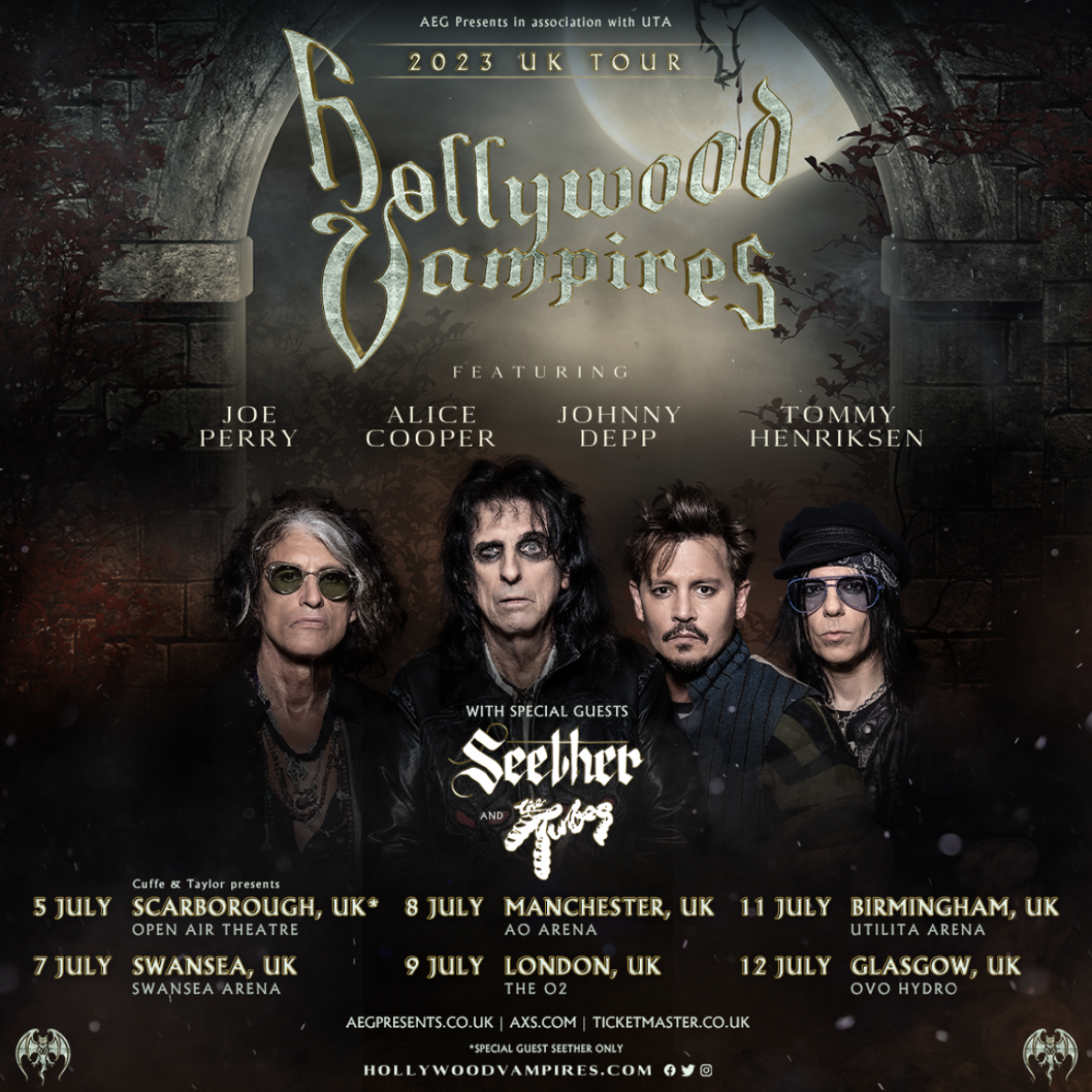 Forced to cancel their planned 2020 tour due to the pandemic, the special bond that ties the members of the Hollywood Vampires to the UK has brought them back at the earliest opportunity. Making no secret of their love of classic British rock n roll, they pepper their blistering sets with songs from The Who, Led Zeppelin, David Bowie, Motörhead and more.

Alice Cooper:
"Well, it’s already been three years since the Vampires have toured because of Covid. Also,Johnny has his movies, Joe’s in Aerosmith and I’m in Alice Cooper, so we have to look at that whole thing and see when we can all get a month or two off where we can go out and tour. And, we are going to be doing that, next summer coming up, 2023. I can't wait to get back with the guys, I really love being in that band. My band is great and wonderful, but playing with the Vampires is an entirely different situation. I don’t necessarily do any theatrics at all, I’m just the lead singer, in a band, and the band just happens to be one of the best bands around! It’ll be great to see Johnny and Joe and Buck and Chris and all the guys. We’ll be rocking these places, especially the UK, I can’t wait to get to the UK! Lock your doors, put garlic all around, because the Vampires are coming!"


Joe Perry:
‍“Next Summer it will be finally time for the Hollywood Vampires to rise again! We can’t wait to play the songs from our latest album, Rise, for all our fans across the pond. The excitement builds as we countdown the days! See you all then...remember, leave the garlic at home!”

The self-described “best bar band in the world” consists of core members and rock legends Alice Cooper, Johnny Depp and Aerosmith ́s Joe Perry, together with guitarist Tommy Henriksen. Their tradition is to play a riotous tribute to the great lost heroes of music and their own original material, released on their studio album ‘Rise’.

With stone cold classics by the likes of The Doors, Love, AC/DC and the rest, plus of courseAlice and Aerosmith’s hits, the band was voted the “best performance” of 2018 at London’s Wembley Arena on their last UK journey.

The three legends first came together to record in 2015, bonding over a shared love of their favourite songs and a desire to celebrate their ‘dead, drunk friends’ by playing the music of the fallen heroes. Named after Alice’s 1970s drinking club that included the likes of John Lennon, Keith Moon and Mickey Dolenz, legendary performances ensued around the world.

The 16-track album ‘Rise’, produced by Tommy Henriksen and the Hollywood Vampires, is one of the purest, most unapologetic and enjoyable rock and roll albums of recent times, made by masters of the craft and true fans of the form. Unlike their 2015 debut record, the second album consists mainly of original material, written by the band. There are, however, in the spirit of theVampires’ original mission, three covers of songs originally written and recorded by legendary rockers who died far too young. ‘Rise’ is released on earMUSIC.

Since forming in Pretoria, South Africa in 1999, Seether has amassed a global fan base that has grown organically, offering their fans around the world camaraderie, comfort, and a sense of personal power. Their impressive sales and chart history includes three platinum and two gold albums, 17 #1 singles, 21 Top 5 multi-format hits, single sales topping 17 million and over2 billion streams world-wide across all platforms. Seether is Billboard’s #8 All-Time Mainstream Rock Artist, which covers the 40-year history of the chart’s existence. Their most recent album — their eighth — the acclaimed Si Vis Pacem, Para Bellum (If You Want Peace, Prepare for War), was released in 2020 via Fantasy Records.

San Francisco band The Tubes will also be supporting on all UK Tour dates (except Scarborough) from 7 July onwards.

Hollywood Vampires VIP Packages will be available to purchase from 25th October. VIP packages may include a personal photograph with Joe, Johnny and Alice, a front row ticket, exclusive merchandise, autographed memorabilia and more.

GET THE ALBUM ‘RISE’ HERE:
https://HollywoodVampires.lnk.to/Rise